WALKING THE HADRIAN'S WALL PATH: Days 1 and 2 — Wallsend to Wall 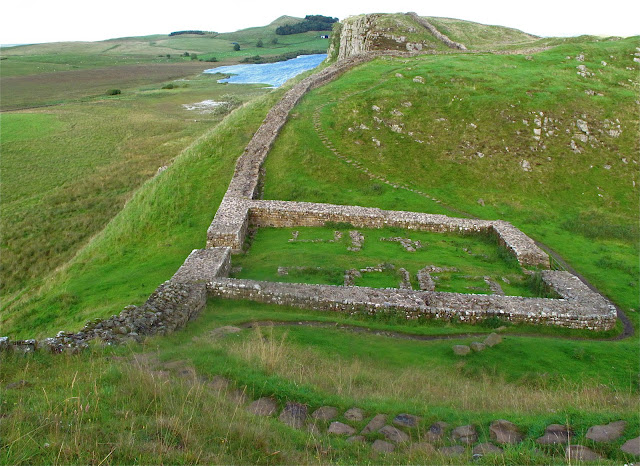 Hadrian's Wall formed the north-west frontier of the Roman empire for most of the period AD122-410.  The empire's frontiers extended over 5,000 km from the Atlantic coast of Britain through Europe, the Middle East and across North Africa to the Atlantic.

The site's outstanding universal value to humanity is recognized under the World Heritage Convention, 1972.

Inscription on UNESCO Plaque at Segedunum


Eight days ago, I completed my 85-mile walk of the Hadrian's Wall Path, which stretches westward from Wallsend (just outside Newcastle on Tyne) to Bowness on Solway.  Now part of the United Kingdom's incomparable national trail system, the path follows the ruins of the magnificent wall constructed by the Romans between AD 122 and 128 under the direction and guidance of Emperor Hadrian, who is remembered historically as one of "the five good emperors."

The Romans occupied Britannia in AD 43 and spent many years thereafter trying to subjugate the local tribes.  On the whole, they were eminently successful; indeed, to some extent, many of the southern tribes eventually grew comfortable with the civil order and new infrastructure that came with Roman life.  The northern tribes, however, known collectively as the Caledones and living in the area that is now Scotland, remained steadfastly recalcitrant and continued to resist Roman occupation at every opportunity.  At the same time, mounting obligations in other parts of the Roman Empire were placing new burdens on both the treasury and the manpower of the empire.  Thus, rather than remain in perennial conflict with the Caledones, the Romans decided to formally establish a northern frontier to their empire and to fortify that boundary as a means of separating the "lawless" northern tribes from the conquered and "law-abiding" southern tribes.

It was against this backdrop that Hadrian ordered the construction of the wall in  AD 122. Much of the wall has been destroyed over the centuries by subsequent military conflicts, vandalism, scavenging, and weather.  What remains, however, is magnificent, which is why UNESCO, in 1987, added the wall to its list of World Heritage Sites, placing the wall in the company of Petra, Angkor Wat, Machu Picchu, the Taj Mahal, and the Great Wall of China.  Moreover, as indicated above, a walking path parallel to the wall was formally established and made part of the UK's national trail network in 2003.

I was honored to be joined on the walk by my two great friends — Robert, author of The Solitary Walker, who joined me for four days of the walk, and Dominic, author of Made Out of Words, who joined us for a couple of those days.  Meeting these guys and enjoying their fine, cheerful, and edifying company was, without question, the highlight of the entire trip for me.  For what it's worth, there was not a scintilla of difference between the friends I encountered personally and the initial impressions I had drawn of them from their respective blogs.  Authentic, intelligent, adventurous, morally courageous, and good humored — these are the words that best describe the two guys who tramped with me through the best sections of the Hadrian's Wall path.

More about Robert and Dominic to come, so let's begin.
Day 1:  Wallsend to Wylam
The path began inauspiciously at Wallsend near the foundation (photo below) of the ancient Roman fort of Segedunum, which is located in a largely industrial area. 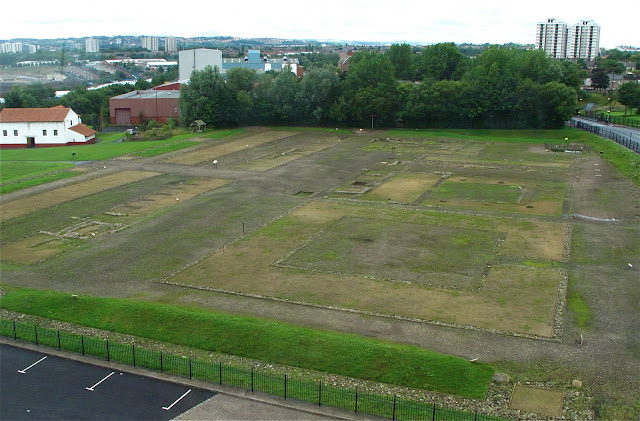 Soon after leaving Segedunnum, however, the path took on its own kind of beauty, with magnificent patches of rosebay willowherb juxtaposed against the blue fences that offered visual protection from some of the modern developments. 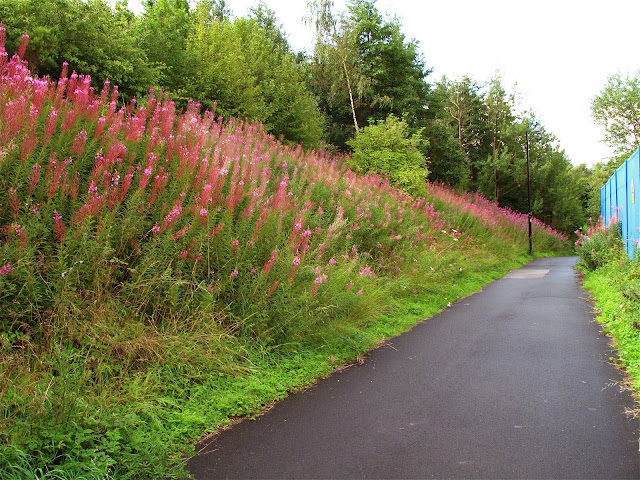 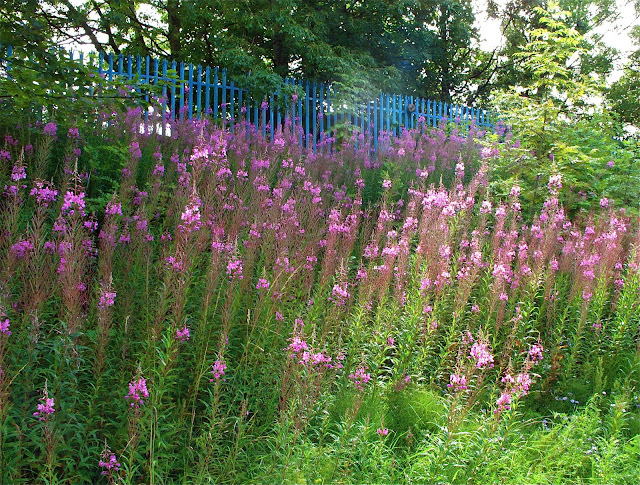 The initial four or five miles of the path is an asphalt walking/cycling track that runs alongside the River Tyne.  At one point, however, the path diverted through some lovely parkland . . . 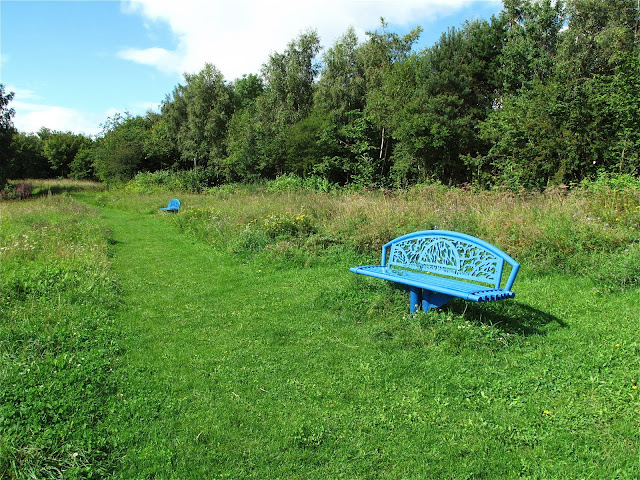 . . . before returning to the asphalt track along the river.  In the distance, I could see the city of Newcastle . . . 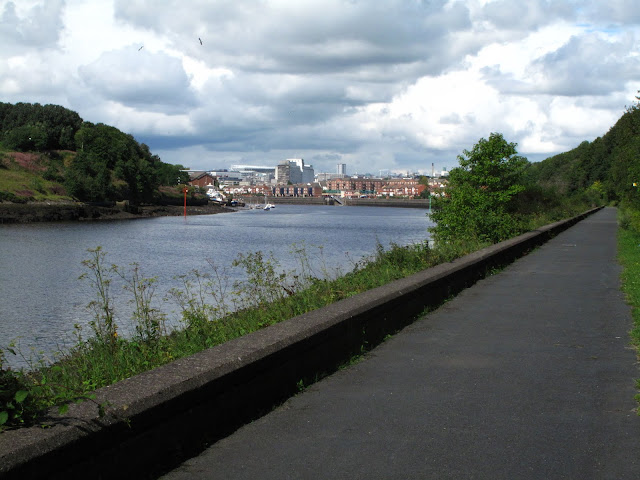 . . . which has some very interesting bridges, including the Millennium Bridge (below), also known as the "winking eye" or "blinking eye" bridge.  As one can see from the darkness of the next photo, however, the weather was taking a turn for the worse, so I pressed on, eager to reach the green, softer footing of the English countryside. 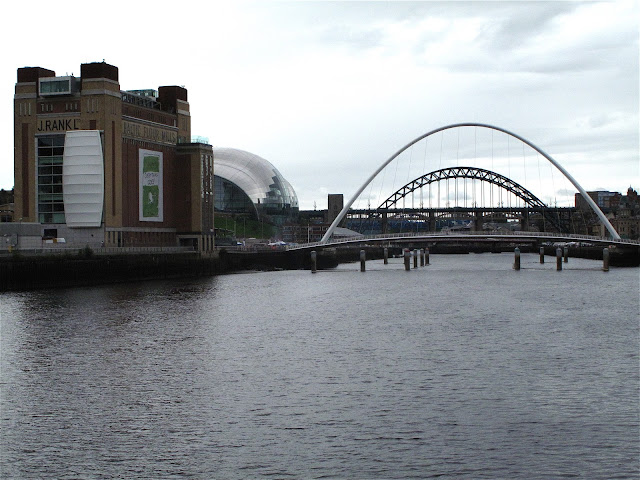 After leaving Newcastle, I reached the pleasant surroundings of the Tyne Riverside Country Park and and followed a riparian path that catered to equestrians and cyclists, as well as walkers. 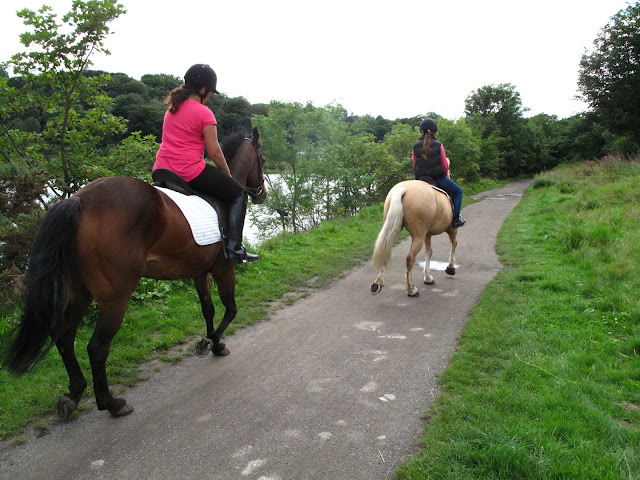 After a few miles, the path turned away from the river, proceeded through some pleasant communities . . . 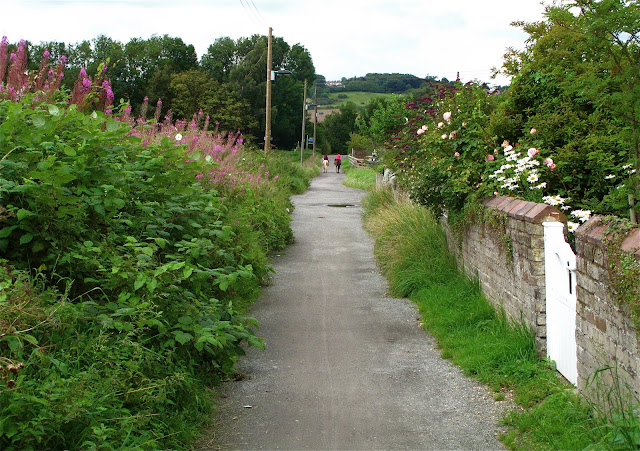 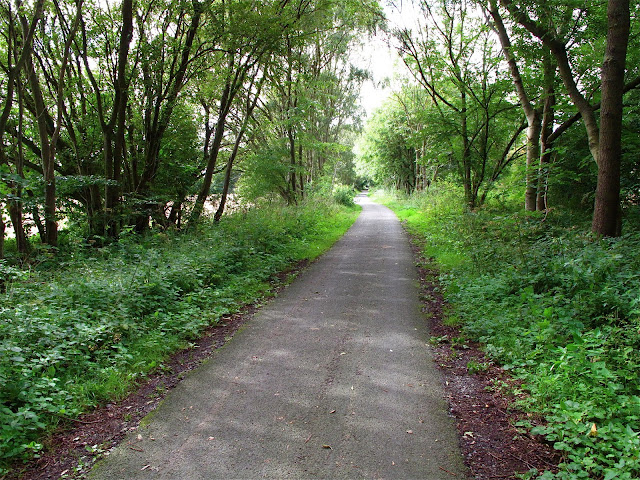 . . . past the childhood cottage of George Stephenson, inventor of first steam locomotive for railroads . . . 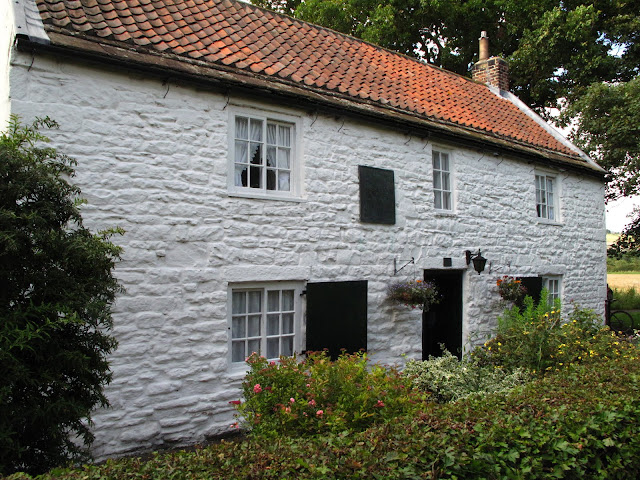 After a brief walk to from Wylam to Heddon-on-the-Wall, I discovered the first significant portion of Hadrian's Wall. 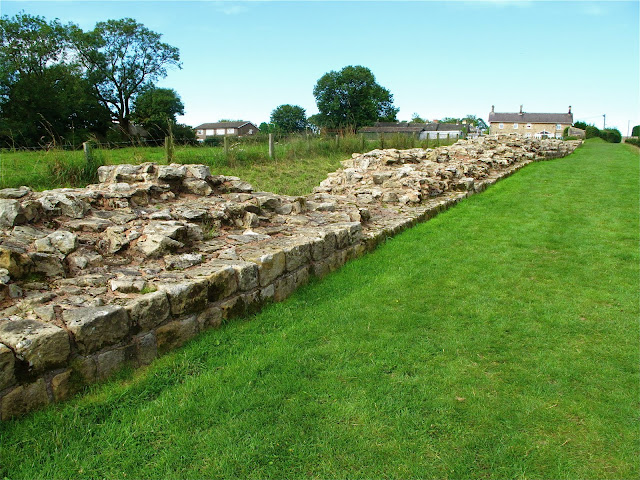 The path then paralleled a highway that was built upon the wall many years ago. The views were lovely, however, often giving me a sense of walking up into the clouds. 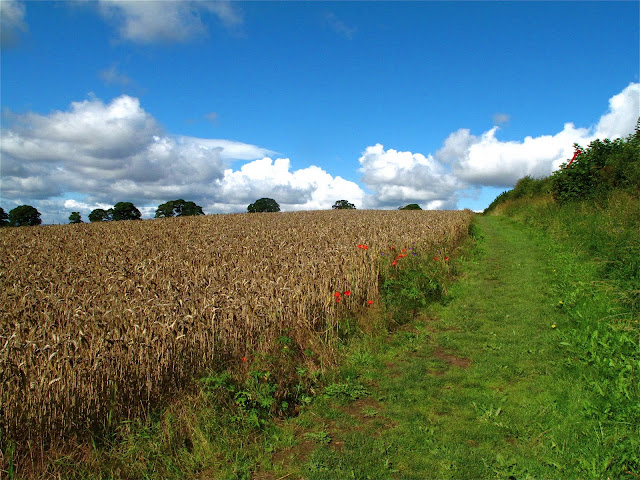 Being a national trail, the path was well marked.  When in doubt on a national trail, one need only follow the white acorn, which is always posted on signposts, stiles, kissing gates, and other places along the path. 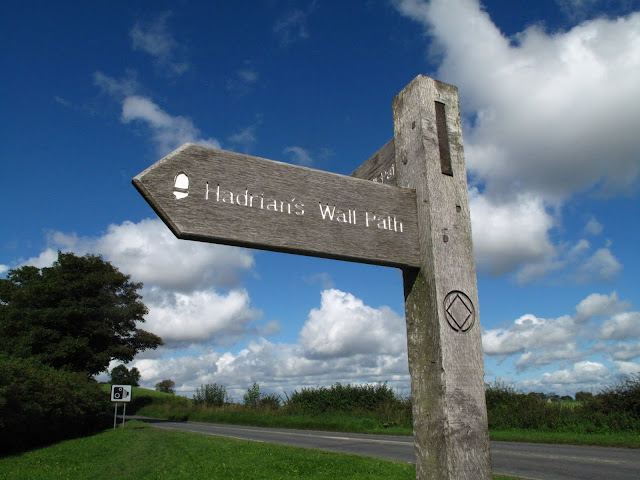 After crossing the road in the above photo, I continued westward past magnificent wheat and barley fields, all crowned with magical clouds. 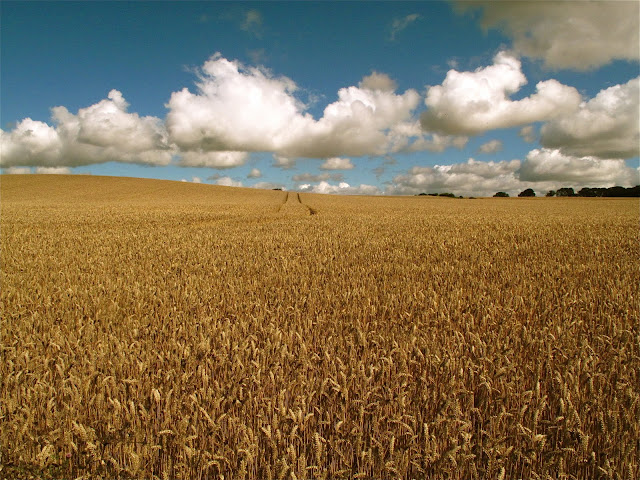 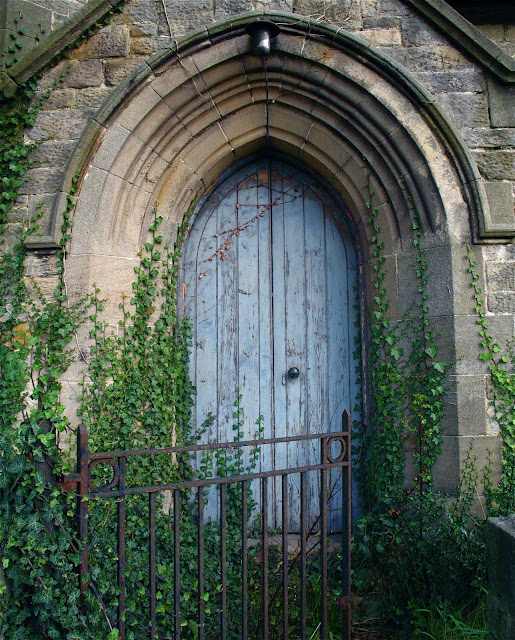 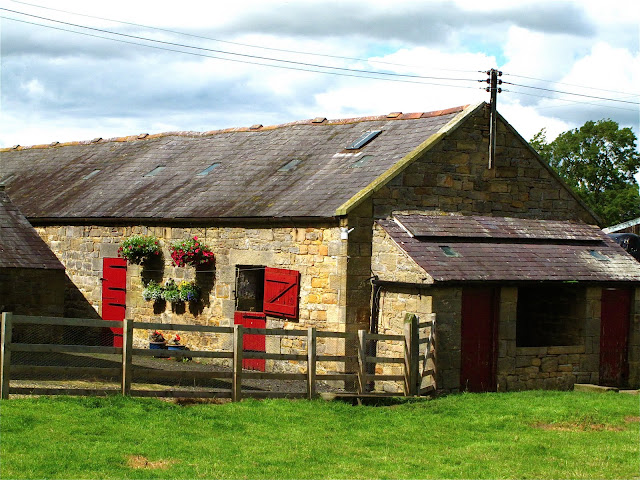 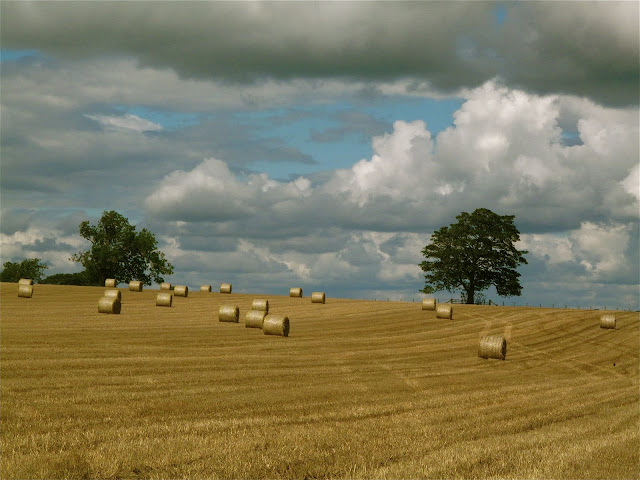 As I moved westward, the path was bracketed by endless bouquets of wildflowers on the left and a stone wall on the right . . . 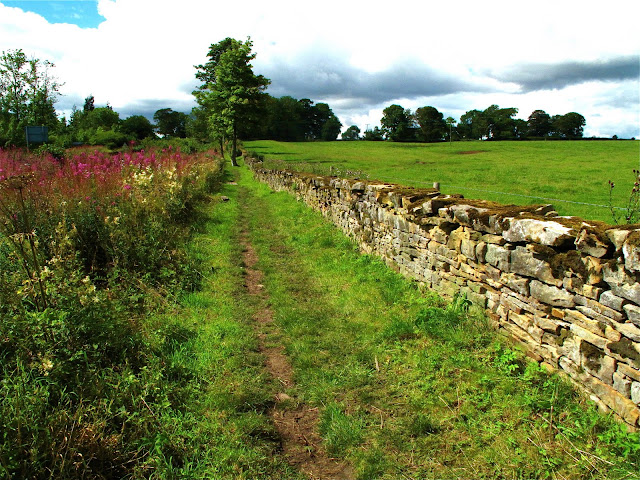 . . . eventually leading me to cross the road, walk through a pasture of grazing cows . . . 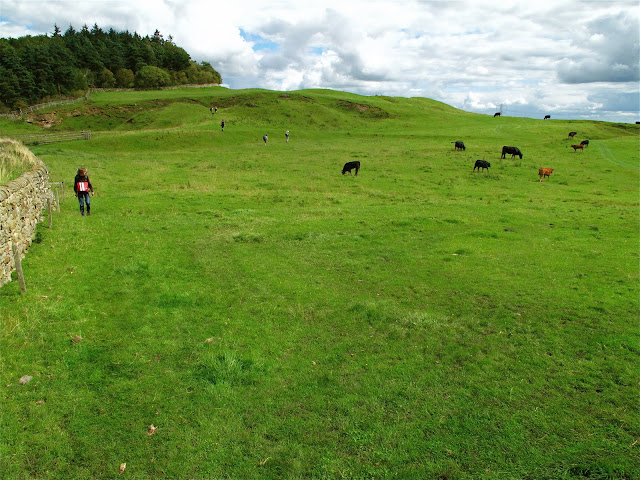 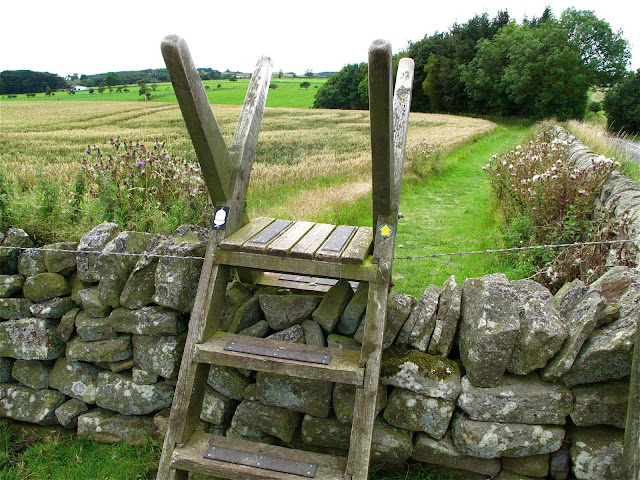 . . . and discover a wonderful new section of the wall. 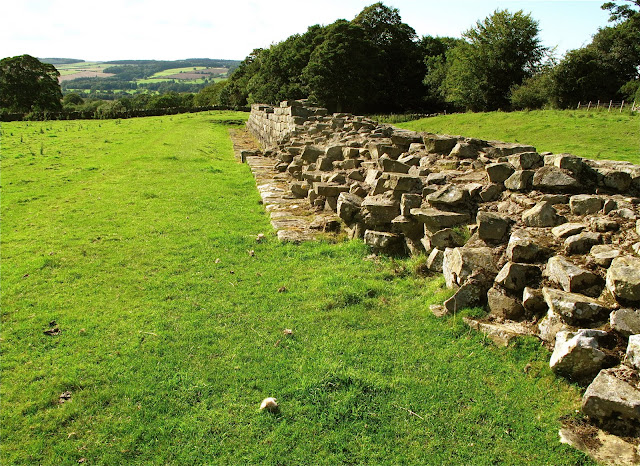 A few miles later, I arrived at the village of Wall, where I spent my second evening of the walk at the Hadrian Hotel.  Little did I know that another guest in the hotel that night was the mysterious Solitary Walker . . .

Stay tuned.  The scenery and the stories get better in the next post.
Posted by George at 5:13 PM 37 comments:

George
I'm a retired guy who lives in upstate South Carolina with my wife, my beloved yellow lab, and a variety of beautiful wildlife. My interests include travel, nature, photography, hiking, reading, writing, and walking.

Welcome to my blog. This is essentially a journal of words and photographs that, hopefully, will contribute to the conversations we have with ourselves and each other about the important things in life. 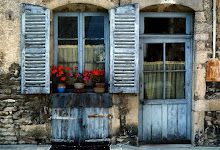 "A man should hear a little music, read a little poetry, and see a fine picture every day of his life, in order that worldly cares may not obliterate the sense of the beautiful which God has implanted in the human soul."
Goethe 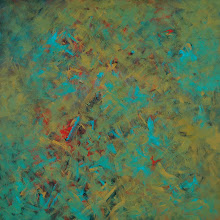 "Twenty years from now you will be more disappointed by the things you didn't do than by the ones you did. So throw off the bowlines, sail away from the safe harbor, catch the trade winds in your sails. Explore. Dream. Discover."
Mark Twain 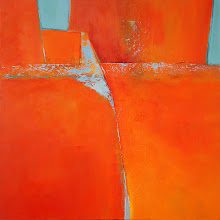 "Security is mostly superstition. Life is either a daring adventure or nothing."
Helen Keller

"The most strongly enforced of all known taboos is the taboo against knowing who or what you really are behind the mask of your apparently separate, independent, and isolated ego."
Alan Watts 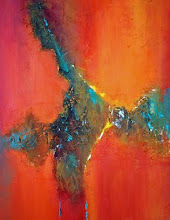 "To be avoided at all costs is the solace of opinion without the pain of thought."
William Sloan Coffin

"Happiness is strange; it comes when you are not seeking it. When you are not making an effort to be happy, then unexpectedly, mysteriously, happiness is there, born of purity, of a loveliness of being."
Krishnamurti 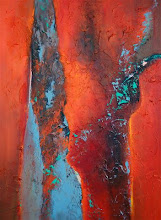 "Whatever you can do, or dream you can, begin it. Boldness has genius, power, and magic in it."
Goethe 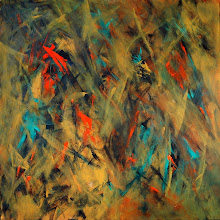 "Each of us is an artist of our days; the greater our integrity & awareness, the more original and creative our time will become."
John O'Donohue

"It is only with the heart that one sees rightly; what is essential is invisible to the eye."
Antoine de Saint-Exupery 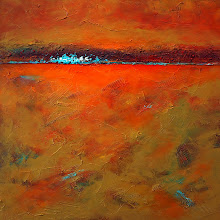 "The most beautiful emotion we can experience is the mystical."
Einstein

"Only the hand that erases can write the true thing."
Meister Eckhart

"What gives life its value you can find -- and lose. But never possess."
Dag Hammarskjold

"The art of being wise is the art of knowing what to overlook."
William James 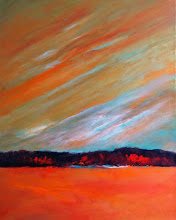 "Understanding is not a piercing of the mystery, but an acceptance of it, a living blissfully with it, in it, through and by it."
Henry Miller

"God does not die when we cease to believe in a personal deity, but we die on the day when our lives cease to be illuminated by the steady radiance, renewed daily, of a wonder, the source of which is beyond all reason."
Dag Hammarskjold